I know these photos were taken in 2006 or 2007, because that's our old Chicago apartment building. But I can't be surer than that, because 2006 is the last time I bought a bike part. This is exactly the bike I'm riding today, except the rusted spots have continued to bloom. 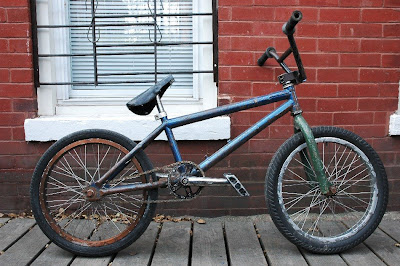 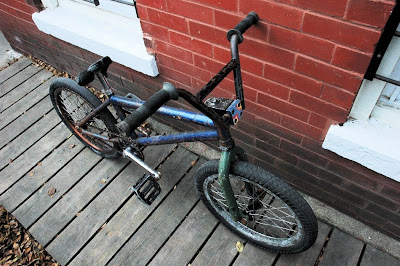 Frame: Metal Kizz. Apparently this was Jeremy Davis's personal rig for a short time. I paid eighty bucks for it in 2002 (I think), after my Kink Empire was stolen. Most of this bike is the same charity parts, actually. There are temper tantrum hammer dents in the down tube, presumably inflicted during a difficult bottom bracket installation. I may cut the mounts off.

Castillo Bars. I fell in love with low, narrow bars at age sixteen and haven't run two-piecers since the stock bars on my Mongoose Decade. More on the four-piece fascination here. 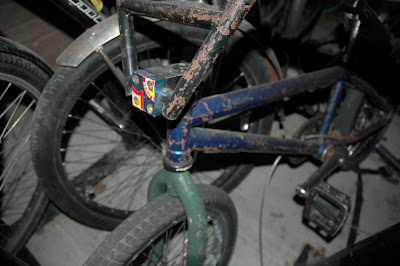 S&M Redneck. This was originally part of a Holmes custom complete, built in the bike shop where I worked in 1996. The kid never liked the way the bike handled, and he soon quit riding altogether. The stem design is so old that it's not even gyro compatible. Very pointy corners. Blue face plate is from the quill Redneck that I once ran on my 1" Standard Shorty. I'm planning to switch to an Odyssey Elementary at some point.

Chainring: TreeBikeCo 36t. Still straight, even after shearing off the bashguard.

Seat/post/clamp: Mangled GT plastic with the nose cut off. This was the original seat on my Shorty, I think. Unearthed it in a tool box a few years ago. Primo Rod post and Primo Viking two-bolt clamp, cut in half. These parts are the weakest link in my setup, and I hate them. I'm planning to switch to some kind of Pivotal.

gSport Vandal hubs. I never cared the name gSport or Vandal, but I've been passively obsessed with G's products for some time. These hubs have double-thick flanges to resist damage from grinds. A sensible design choice, but I hardly even grind any more. 48 spoke.

Peg: I threw away all my rusty metal pegs a few years ago, in anticipation of Plegs. But I got impatient with Odyssey R&D, and one day when I was in the mood for hang 5's, I dug this ThickBikes plastic peg out of a tool box and installed it. It's been there ever since. When I originally bought these, the shop only had one pair for sale. If they'd had two pairs, I would've taken both. But I never could stand the asymmetric look of two white pegs, so these didn't get used much beyond the first week. If you want to grind aluminum rails, they do work really well. I think I paid $45 for the pair. Crazy. (This photo taken today.) 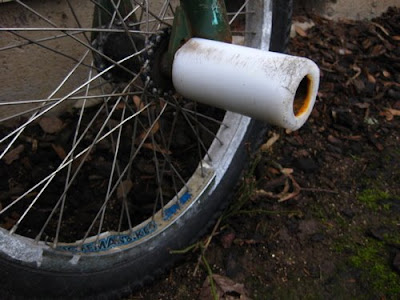 Tires: Ruben up front (love it), Odyssey Path in back. The Path is comically bald at this point, but I just keep duct taping the inside whenever I find a new thin spot. The technique is so effective that I wish I'd never started.

Rear rim: Sun Big City. I can't believe the durability of this rim, and it has completely eliminated pinch flats. It was originally black but is oxidizing towards a shade of copper. I kinda like it.

Front rim: Hoffman Highroller, from the first batch of Taiwanese Gack wheels, circa 1996. Still somewhat round. I'm not entirely comfortable with the ugliness of the flaking chrome. Whenever a new flake starts to go, it makes a whizzing sound in the wind. 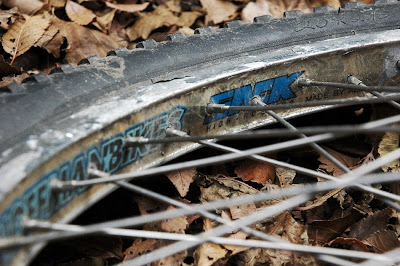 On a related note, I recently acquired a good condition Standard Trailboss frame in exchange for a beat-up old Holmes--actually, the very same Holmes the Redneck came from, mentioned above--and I'm contemplating what to do with it. I don't know if I want to switch all these rusty old parts over or just build up a second bike with new modern stuff. I wouldn't mind sacrificing ten pounds of excess metal, and I don't have any kind of artistic or political commitment to old technology, really. But the Kizz just keeps on running, and the accumulated memories just keep growing. I guess that's called nostalgia.
...
Recent, related, excellent items you've probably already seen: