I do love blogging. I think blogs are an important, relevant medium for original content. And I think the challenge that the internet represents for hard media like print and dvds is competition in the healthiest sense of the word.

If anything, the instant, fleeting nature of the internet highlights the slow, tactile pleasure of turning glossy pages with your fingers and the rich feeling of a well curated bookshelf.

It is in a similar metaphorical sense that this blog has laid dormant for the past three years, while my life has been consumed by numerous other very satisfying, damn tangible, rather long-term projects -- most notably, our second child Theo and the gut renovation of our first house.

To say that the arc of DBZ's past three years have been somewhat more tumultuous would be an understatement. But as of summer 2013, his life is approaching a level of stability that I would call borderline domestic. He's back in Portland, happily married, gainfully employed at a job he "loves," and this spring he produced two excellent zines that no bmx archivist will want to be without.

I think the term "zine" shortchanges the visual force of these staple-bound pieces, which showcase not just DBZ's obsessively refined graphic aesthetic, but also his skill for page layout. And he can write like a motherfucker. 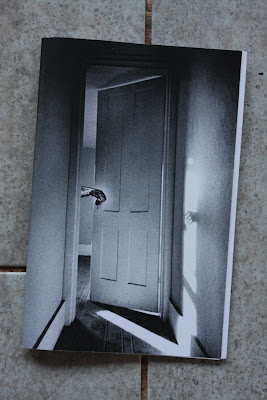 Noumenal Room is a weighty collection of illustrated essays from DBZ's blog. Topics range from skateboarding and bmx to architecture and typography to cigarettes and pornography. 52 pages. Order here for $13. 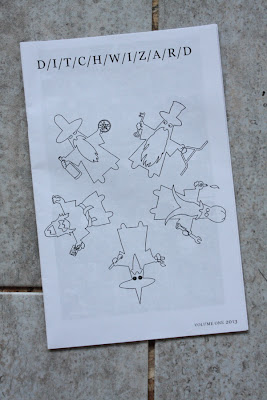 I dogmatically believe that being "at a loss for words" is just weak writing, but hell if I can articulate what D/I/T/C/H/W/I/Z/A/R/D "is." I guess you could say it's a collection of found images, far greater than the sum of its parts. Leave it on your coffee table or toilet and see if your graphic designer friends don't ask what the hell it is and where they can get one. It's one of my prized possessions. 12 pages, includes screenprinted Raccoon patch. Order here for $5.

If you're not inclined to buy, you can still get your free daily online DBZ fix via blog, Tumblr and Twitter, none of which are safe to click at work.
11 comments: