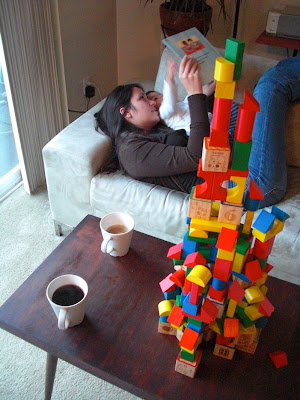 I liked my first tower better, but it fell down. That red triangle block in the bottom right was on top of the green rectangle but got knocked off while I was taking the picture, I guess.

There will probably be more of this stuff.
1 comment:

The video below, reportedly edited by Steven Hamilton himself, has been viewed almost eight thousand times since its internet debut two days ago. Responses to the video on bmxboard, the Come Up, and T.V.O.'s Life? were split, tending either towards strong disappointment or strong enthusiasm. The comparisons to mid-90's LSD-influenced video producer Ells Bells seem absolutely appropriate.

There are eight more Hamilton-related videos from the same Youtube user, Lobsterspine, some of which are measurably easier to watch, and none with more than eighty views to date. These include parts one through four of some project called Inception 2. If I understand correctly, Inception was the name of Hamilton's high school video project.

Inception 2, part two. Trails down a fricken' gully like nothing I've ever seen! Where is this? I guess it goes without saying that footage of Ted Van Orman is always great.

Parenthetically, here's the only evidence of Inception 1's existence that I'm aware of:

It would appear that Lobsterspine is Hamilton's personal account, or that of someone close to him. I can't think of another pro whose mind is better suited to Youtube as a creative medium.

Also recommended: the Street Phire "My Bag" galleries, which document the contents of camera bags of different bike riding photographers and videographers. I like how Robin Hunter's particularly exhaustive bag check even mentions which items have Nikon or LowePro printed on them.
2 comments:

Reviewed: Four Corners by No Bikes

The No Bikes crew released Four Corners almost a year ago, and they're well into production of their next video, so it's fair to say this review comes a little late. Four Corners was already out of print when I first contacted Aaron, but he sent me a burned copy with a No Bikes sticker and a cover collaged from tourism brochures. Awesome. 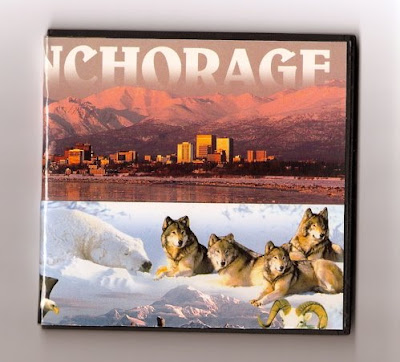 The trailers represent the video fairly well: solid riding from kids you've never heard of, riding spots you've never seen, peppered with the occasional pro throwing down burly moves at some familiar skatepark. For the record, that shot of Travis Sexmith's table air is one of my favorite clips from any video ever.

It's tastefully edited and well filmed and paints a fantastic portrait of the riding scene in Alaska. Good vibes. No bike throwing. I want to go there.

There's a ton of great trails footage, which kind of feels like the heart of the video and the scene, but nobody has brakes, and the dirt footage is balanced by equal parts street riding and park. (Way too much park footage, in my opinion, perhaps the result of trying to get a clip from every single rider in Alaska.) The highlight of the video for me was Matt Lindsey's part, self-filmed via tripod in what appears to be Russia or China or perhaps Hawaii??? It left me pleasantly baffled, seeing all the incredible communist architecture so unlike anything in the states, including axle-high ledges that might rouse Joe Tiseo from his grave.

Alaska bears no resemblance to California or NYC or any place in my mental catalog of bmx images, and yet there are kids there putting in work, and that's what I love about this dvd. Check this ancient Youtube gem. A comically rickety portable ramp, set in places that seem absolutely arbitrary, but not (apparently) as any sort of joke. I'm just so happy that it's all real.

Four Corners is chock full of this stuff. Watch the No Bikes blog for progress on their next video, which I have been told will document some of their wilderness riding excursions, which gets me really, really psyched. I invite you to hassle Aaron for a copy of Four Corners with a custom cover. I don't know if he'll say yes.

December 19 edit: updated with an excerpt from Aaron's response to this review:

One of the things I try to do with all my videos is be as inclusive as possible. Scene videos, to me, aren’t just putting together the best tricks from the best riders in town. Back in the day we always had local contests to bring people together; since video is the new medium that we “measure” people’s riding by, I think the scene video is often missed as a scene building tool. Videos give everyone something to work together on; I try to shoot with as many people as I can and get anyone involved in production who is interested in that kind of stuff. This year I got to plan three awesome trips to shoot for this video, and got to know more Alaskan bmxers, there’s really nothing else I could ask for from the process. So yeah, I was trying to film everyone in Alaska, glad you noticed….

We are very happy that Alaska is as unique as it is. There is plenty of stuff to ride up here, and even more to see and experience (where else can you ride trails after midnight). I wish more people would be curious enough to come up here. Rooftop and the Samurai guys had the right idea, but I don’t think they really found any of our spots. I would never want to come up here again if one quarter of the spots I rode was the Wasilla skatepark.

I made a trailer for the next video, but have to add some audio clips in with Steve before it’ll go online. Look for it in the next couple weeks. Ryan Hiebert has been working hard on the team video as well, so get pumped for that (if you haven’t been reading this blog for long, there will be a documentary about riding in Alaska and a team video featuring all of our friends from her, BC and anywhere else).