From the 217 blog. Spotted here on bmxboard last night.

TJ reminds us that there's more to bike riding than just gaps, grinds, and manuals.

Like most of the people who responded to the post, I, too, would have picked a different song for the edit. But this is the same type of stuff that gets used in all the 217 videos, so I guess it's what they're into. The music was not nearly as bad as I expected, after reading everyone's responses and before clicking the link.

DDX responded to the video, "I hate freecoasters," a sentiment generally expressed in reference to the legions of stripped seat Ian Schwartz clones. Not to put too fine a point on a very dead horse, but I call DDX's attention to TJ's four pegs, 2 brakes, and gyro. TJ's freecoaster is, if anything, a midwest Moliterno/Friemuth reference.

While we're talking about tricks, I'll mention the Fresh Fish trailer, which turned a lot of heads this Spring, and which I'm sure you won't mind watching again.

The opening bangers belong to Andrew Longstreet, from Everett, Washington, another longtime friend of ours. Andrew's dirt jumping roots are obvious, and if you find his clips kind of "funny," you'll probably dig Andrew's sense of humor. I think this kind of riding illustrates the simplistic inadequacy of the tiresome Style Vs Tricks Debate. Andrew's footage is interesting and wonderful not because of the tricks or the style, but because of the context.

Still haven't heard where to get a copy of Fresh Fish. Is it out yet?

Andrew and TJ both have clips in our video, which you should probably purchase. (Buy Now button at the top of this page.) While you're deciding, check out the clip of TJ and Ben in the March 9 Bikes and Coffee post. Then go try to spot young Andrew in the 2003 DailyGrindCrew web video, discussed in last year's July 30 post.
2 comments:

The Ukrainian city of Pripyat has been a ghost town since 1986, when, bullseye downwind from the Chernobyl nuclear disaster, its entire population was evacuated in a span of 24 hours--50,000 people, one suitcase each. Everything else remained as it was left, a perfect time capsule coated in fallout. Three decades without human influence have given nature the opportunity to begin reclamation of the land.

Wikipedia reports that background radiation is at a safe level now; sometime around 2000, looters began clearing out the city's apartment buildings. "Nothing of value was left behind," Wikipedia states. "Even toilet seats were taken away."

Archaeologically speaking, it's too bad that the time capsule has been violated; or perhaps it's good news that Ukrainian entrepreneurs are tapping into these long-frozen assets. The city border is still controlled by the military, but tour companies are being granted access. I don't suppose that a bmx bike would be allowed inside. Maybe if you greased the appropriate palms.

How hilarious/cool would it be to hop that fence with a crew of friends, bikes, and camping gear, and explore the silent city, cruising down streets and sidewalks, carving around the trees and weeds pushing up through the pavement? I bet much of the city feels like utter wilderness.

(BTW, on the bmx+camping tip, check the NoBikes blog for photos of their excursion to a remote spillway in the Alaskan wilds. Wish the write-up went into greater detail. I'd be interested in the non-riding photos, too.)

Not actually a missile.

Put some tiremarks on Lenin. 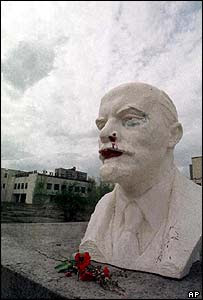 ...Too many amazing Pripyat images to choose from. Here are handful from around the internet.
[Nuclear] Winter. 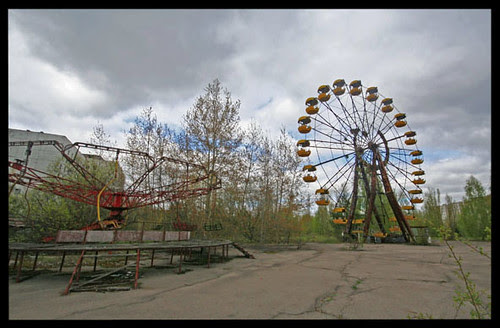 Chernobyl in the distance.

This has been a good week for fans of Steven Hamilton. His fantastic part from 2004's The Day is Over made its way online a couple days ago, and just last night bmxboard's Alistair Heely uploaded the full 2005 Tip Plus video The Family. (Clips below)

Everyone appreciates Hamilton for his unconventional peg-free approach to street riding, not to mention his casual hucking of monstrous gaps. But for some reason his effortless bike control and clean style are overshadowed by the motowhipping likes of Aitken and Hawk. For style, that's my personal top three, probably, with Hamilton on top.

I think it's significant to note that none of the three is taller than 5'10. Aitken and Hawk are small men that have always ridden huge frames and handlebars, and I think this visually striking jockey-on-stallion effect is one reason they look so damn good flying through the air. Hamilton, by comparison, rides a flatland frame and more "medium" bars, and he could be even shorter than the other two guys. The allover smallness makes his wheels look huge in a way that I find really satisfying, and, furthermore, he seems to have an exceptionally large bunnyhop. But his pop is so natural that I've never heard anyone comment on it.

And Hamilton comes across as a real guy, thanks to his smile, unaffected demeanor, and penchant for a good hoody. Here's the text from his Dig issue 42 interview, archived on Tunney's excellent blog. (the full thing w/photos! --Ed. 11/16/09)

Of course, there hasn't been video footage of Hamilton in a couple years. After leaving the limelight, rumors circulated that he had fried his brain with drugs and stopped riding. Then, in a 2007 issue of RideUK, Hamilton reappeared with a cover shot and a dozen excellent, sponsor-worthy photos (lots of gaps and even a handrail with pegs!) and the most memorable interview of all time. He seems to have gone voluntarily insane and now lives in a parallel psychadelic world. (You can read the RideUK interview online now.--Ed. 9/13/09)

I was disappointed on one level (bye-bye striped shirts), but pleased to find that the new Hamilton is just as real as the old one, escaping the annoying outward trappings of hippiness in favor of an apparently authentic schizophrenia. Sunglasses at night? Intentionally mismatched gloves? A bike covered with seaweed and twigs, painted over with gloss black spraypaint? Keep this stuff coming, please!

It might be said that the "crazy drugged bike rider artist" thing was pioneered by the Gonz, but, by contrast, Hamilton doesn't seem to care whether we notice or not. As always, he's doing his own thing, living his own life, and it feels like a privilege when we get access.

Along with every other bike rider alive, I'm hopeful that we'll see video footage soon, and Hamilton's Phoenix-like return will be complete.

Here's all the footage of Hamilton that I'm aware of. If you know of more, I hope you'll share.

The video part that made Steven Hamilton a household name, from AnimalBikes' Can I Eat?


From the old Ohio video A Day Late and A Dollar Short.


Steven's first part ever, reportedly, from a video called Inception, which I know nothing about. Packed with bangers and striped shirts.

From the Federal video. Last two clips are heart-stopping.


The complete Orchid roadtrip video Step On It. Lots of Hamilton footage. Ridiculous clip at 6:40.


And, finally, his recently uploaded part from Elliot Van Orman's The Day is Over, 2004. Perhaps my fave video part ever. When this song gets stuck in my head, I don't mind at all.


And thanks to aaron for bringing to my attention the really good skapegoat 2.5 web video, from March of this year, which includes some recent footy from Ham. Bonus: a bunch of brakeless riding from Ralph Sinisi!

July 19 edit: From the Animal site, , in response to this blog posting:It really is nuts to see Hamilton kill it and I promise you all he is not done. Hamilton has been in the area for the past few weeks puttin in some work for the next Animal Video.

December 9 edit: The internet has yet to make sense of this Youtube gem from late October. Who is this video's intended audience? There's a lot going on here, none of which makes sense...

December 19 edit: This vid, edited by Hamilton himself, appeared on the Animal site the other day. See Lobsterspine = The Real Steven Hamilton? for more.

December 31 edit: More classic Hamilton 1.0 footy in a web video from Peter Adam. Just the title "World Travels" is enough to make me feel something. Thanks for the heads-up, Sam.

Some close friends planned an art project/performance/protest, and I was flattered to be asked to help film, though I take no credit for the idea. My wife and I put together this video:

The signs made headlines in two Portland papers--the Mercury picked it up first and then the Oregonian Metro section and Business section--and appeared around the local blogosphere at Indymedia, Matt Davis, livingyellow, and JustSeeds, as well as MattressZine, some kind of mattress trade pub.

Clips were used to mount the signs, so that they could be removed without causing damage, and a safety cable secured it all just in case. One important thing the video doesn't make explicit--but maybe you can still tell--is that the DMC is located right on Belmont St, the namesake for one of Portland's trendiest neighborhoods, fully gentrified over the last decade or so. Someone commented in an old Flickr image that the DMC "gives shiny belmont some much-needed squalor," and this had been my unofficial position on the issue before my friends ever suggested the protest. But the original Mercury post elicited seventy-four widely varying reader responses, most of which made valid, intelligent points.

"Although the art is interesting," blogged jmacphee on JustSeeds, "the responses to it are whats really worth checking out. A fascinating, rambling road through varying opinions on street art, vandalism, gentrification, class, yuppies, and property values."

The most critical reaction to the signs came in a lengthy response to the Oregonian Business section write-up. Someone called "Mannis" detailed his family's longtime business relationship with the DMC. He describes how the DMC's actual business model--selling inexpensive, refurbished mattresses--has directly and indirectly helped "thousands" of local needy families and individuals (a good, liberal notion), while simultaneously, on the environmental front, reducing waste (also a good, liberal notion). Mannis goes on to defend the Confederate Flag and condemn those unwilling to acknowledge it as an authentic symbol of legitimate Southern heritage, separable from the notion of slavery.

Mannis's critique of liberal elitism seems on-point, and, sure enough, a huge majority of the other responses were to the effect of Way to stick it to that ugly store. Don't they know they're in Portland?

I happen to know that the artist's intention (though he wouldn't call himself an artist) was a comment on the symbol and not on the storefront, but no one seemed to notice what he thought was obvious: in Progressive Portland, gay rights, animal rights, and separation of church and state are front page bumper sticker issues, and transgressions will get your business boycotted or your politician blacklisted. Mention racism or segregation, by contrast, and (here's the punchline) the activists shrug their shoulders. Naw, we don't really have those problems here.

For the record, I think it was that specific little slice of hypocrisy that catalyzed the artist.

As expected, the MLK signs came down the next day.
4 comments: