S&M shot me this email yesterday, in response to my questions about the Castillo Bar:

WE STOPED MAKING THOSE AROUND 2002, WE MAKE THE REVENGE BAR, THAT’S THE SAME BAR, JUST LOWER CROSS BAR. 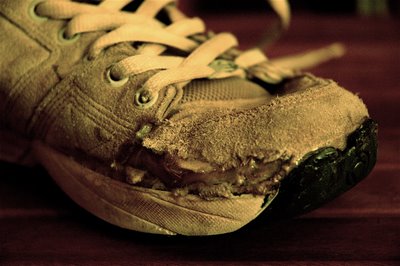 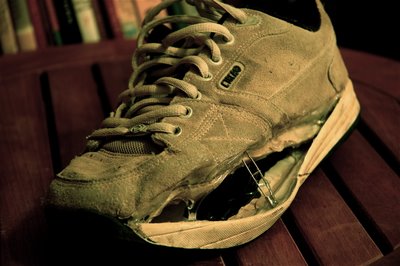 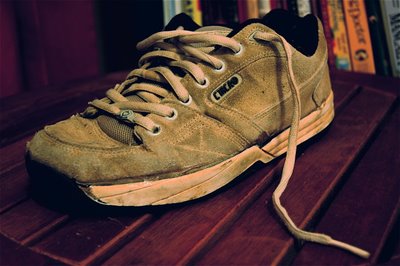 Adrien Lopez's sig has been my riding shoe of choice for three years now. (Go to C1RCA to check out a formidable selection of colorways.) Actually, I've been riding the same pair for three brakeless years. I've finally worn through both heels and a toe, the soles are folding over, and the insoles no longer stay in place, so I'm moving on. Pictured above is a pair that I've never ridden in. The sole started peeling off toward the end of my four-month foreign study in Ghana, in 2004, and I've been saving them for a rainy day project ever since.

First I wiped out all the red African dust, got the two surfaces clean as possible. Then I applied a liberal coating of Goo to top and bottom. That's a safety pin holding open the gap, while the glue dries a little. After a few minutes, I removed the pin and pressed the pieces together tightly. I don't have a vice any more, and all my attempts to improvise one failed, so I gave up, even though the directions emphasize keeping everything clamped until the glue has cured. But after sitting for two days, the shoe feels solid. Also, as shown in the top picture, the toe was deteriorating. I gave that a ShoeGoo patch as well.

I figure these oughta buy me a couple of months, at least. I'll be watching the bmxboard ForSale/Wanted forum, but I think I already spotted my next pair: $19.99 @ Target.
2 comments: