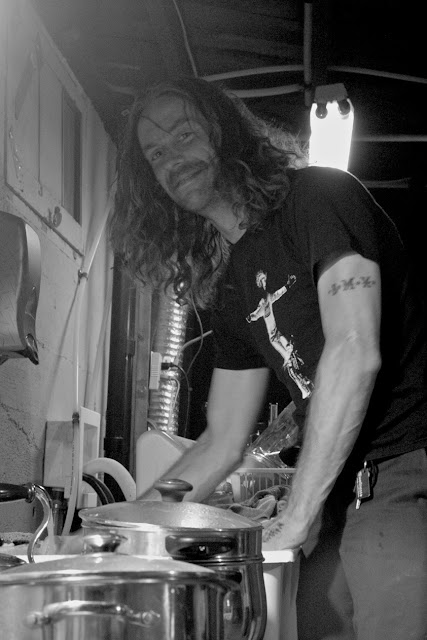 On the Monday before Christmas, my best friend tied a rope to his bathroom doorknob, threw the line over the top, and hanged himself. Now six months have passed, and it feels weird that I haven't written anything here.

This cameraphone photo is the only shot I have of Dominic from the brief time he stayed with us during the summer of 2013. We were in the midst of our three-year home renovation, living out of a makeshift apartment in the basement. Dom is doing dishes in the slop sink between the washing machine and the stove.

Not to put too fine a point on it, but I love this picture: Dom is smiling, you can see his *B*M*X* tattoo, and — oh-so-poignantly — he's sporting the Pretty Heavy freestyle crucifix t-shirt. If there was ever a martyr for bmx, it was Dom.

It was an honor to be so closely involved in the logistics of his death — I wrote Dom's obituary, crowdfunded his cremation, organized a private memorial for his close friends and a public memorial for the Portland bmx community, and dispersed his ashes and belongings to far-off acquaintances, many of whom had never met him in person.

Each of those items felt like a critical, time-sensitive task because I knew people were grieving and needed closure.

What remains has more to do with Dom's legacy than his death. Empire is going to do a run of memorial T-shirts based on Dom's signature raccoon graphic. Eventually Goods will host the permanent archive of his bmx-related original artwork. His bike now hangs from the ceiling there.

Whenever things were going rough for Dom, I'd try to comfort him with the assurance that we would one day be old men sitting in rocking chairs on my front porch. But now he's gone forever, just another dead guy, like every other nameless human since the dawn of creation.

In the weeks following Dom's death, I was so consumed with the minutiae of organizing everything that it felt like I didn't have time to grieve. Now I know that this whole process is grieving. This is me screaming to the world, "Dominic isn't just some dead guy now! He was important, and he's still important! Don't you dare move on!" I want him to stay as alive in everyone else's memories as he is in mine.

Currently the DBZ Archive is a folder sitting on a shelf in my workshop. I also have the contents of his external hard drive backed up on my computer. I don't know when I'll get around to organizing it all in a way that seems sufficiently formal and permanent. Some time this summer, maybe.

Once the shirts and archive are done, Dom's life and death will be out of my hands. I anticipate that it will be a feeling of relief and emptiness. If it takes a while, it's probably because I'm not yet ready to let go.