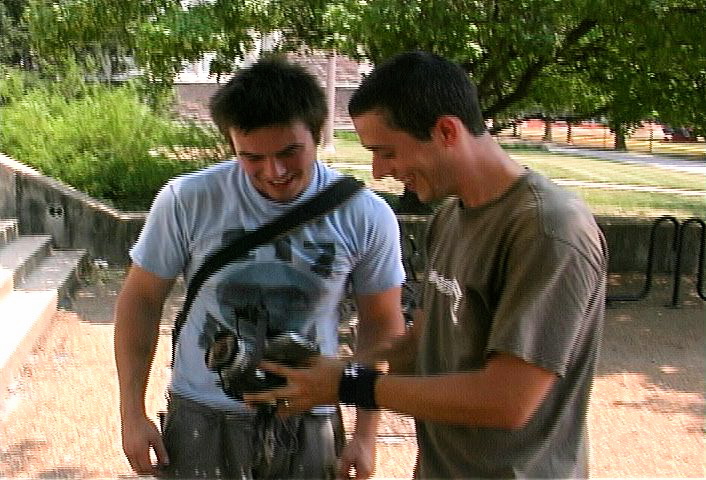 What I'm about to discuss are two principles of editing that I figured out seven years ago while making bmx is cute. These ideas may not be obvious, but they're not complicated or counterintuitive, and I'm amazed that no one has ever pointed out how powerful and important they are.

More to the point, I'm amazed that so many professional videographers seem to overlook or disregard these principles, to the detriment of their work.

These two principles have nothing to do with tricks, style, creativity, spots, camerawork, art direction, or the nitty-gritty of editing and production. They have only to do with that critically important, seemingly intangible quality known as "vibe."

My theory is that, when we refer to a video's "good vibes," we're really talking about authenticity. "These feel like real people," we say unconsciously. "This feels like real life."

And these two principles, as far as I can tell, are the sole determining factors for a video's vibe. Here goes.

Yes, it really is that simple. Behind the soundtrack, you must be able to hear the riding. Turn the music levels down, turn the background noise up. Crank it so high that you can hear the white noise: traffic, wind, nature. Try it. Use software to "equalize" the overall range and dampen the harshness of pegs grinding on metal.

The single most important sound in a bmx video is the whizz of 20-inch tires over pavement, plywood and packed dirt. It's the sensation at the heart of why we all started riding bmx, and it's definitive proof that bmx is cooler than trials riding or fixie freestyle. If you can't hear the tires, then you're just watching a music video.

Check out Rich Forne's Dig edit from 2012. The riding sounds are everything.

You need to choose filming angles that show the riders faces — if not at the exact moment of the trick, then leading up to the trick or riding away from it. There should be some moment when the rider's face is visible, and it's the editor's responsibility to fit this into the video. It won't always be possible, but the more "face clips" you can get into a video, the better the vibe.

The increasingly common second-angle camera makes it even easier to get a visible face for every trick. Even if the trick isn't some first-try-or-die banger, I think it's often worth considering a second angle just to show the rider rolling away with a smile.

Faces are private and personal. This is why family portraits are so awkward and why your favorite photos of yourself are probably candid shots.

Candid moments captured on film or in video are magical, and there is no candidness without a face.

And no authenticity without candidness.

And no vibes without authenticity.

This is why your video needs faces.

As unwieldy as the word "candidness" is, it's an easier concept to grapple with than "authenticity," so I'll probably be using it a few more times before we're done here. We still have a fair bit more ground to cover.

Now, this blog post is directed at the filmers and editors on the production side of the video process. But what about riders who just don't show their faces while riding? I don't have an answer, but I do have some thoughts.

Starting around 2006, the bmx world was introduced to a tiny kid on a huge bike with an ungodly amount of bike control named Dakota Roche. I vividly remember being blown away by Dak's stylish, aggressive riding, but even more vivid is the memory of the complete lack of a vibe from any of his early footage. With his face completely hidden behind long hair and flatbrim pulled down to his nose, I just couldn't imagine that this incredibly talented rider had a personality. I remember screaming into my own brain, What does this guy's face look like??? And I basically wrote the guy off. For years.

If you have no idea what I'm talking about, check out the Seattle scene videos Getting Loose and Second Grenade, Lotek Vancouver, and FitLife. Perhaps I'm the only person who ever felt this way.

But when Dakota finally did start to reveal his face in videos, my feelings changed completely.

Not only was it a relief to know what the guy looked like — His smiling eyes revealed a depth of character that blew me away every bit as profoundly as his riding ability once had, so many years ago.


The thing I love about Dakota's riding is you can feel how hard he is working for every single clip. It doesn't simply look effortless. Rather than applying a new trick to the same old setup or hucking the same trick down more stairs, he continues to push the technical side on terrain that just gets bigger and burlier. He really is riding at the limit of his ability with complete commitment. There is something deeply personal and profoundly authentic about Dakota's riding.

I've never met Dakota, but if I ever get the chance, I know I'm going to be a complete, fawning dork. I can think of no one more deserving of a Monster energy drink sponsorship.

At the risk of putting way too fine a point on it, I'll highlight three features of the above video: visorless winter hats instead of baseball caps, the tasteful inclusion of candid non-riding "lifestyle" clips, and lots of expertly exposed footage that shows Dak's face even in the shadows. Credit for item #1 goes to Dakota, item #2 to the editor, and item #3 to the filmer (and possibly new camera technology).

If you get the bike sounds and faces into your riding clips, you're well on your way to good vibes.

But there is one very important caveat to the faces principle:

This is the part where I talk about "lifestyle footy." If you're going to include non-riding clips in your videos (and I think you should), it needs to be done right. It needs to be candid.

It's easy to capture candidness in riding clips, because the riders are focused on pulling their tricks. These are fundamentally candid moments.

Filming those same schmucks off their bikes is a whole different equation.

High fives, fist-bumps, party footage, tour bus hijinks, vandalism, scenery, local characters, whatever — I'm not going to tell you what's appropriate to include. I am going to call your attention to what is potentially the most vibe-killing moment in a video. I call it "mugging for the camera."

Presumably, these dudes you're filming are your friends, they understand where this footage is going, and they're down with the camera. But that doesn't mean that it's easy to act natural with a fisheye jammed in your face.

If you stick a guy in front of a wall and film him doing nothing — a premise as ridiculous as it sounds, but a strangely common element in way too many bike videos — he may briefly maintain his cool. But the moment soon comes when he breaks character, shakes his head, and laughs to nobody in particular. You know the shot I'm talking about, right?

Same thing happens when the guy doesn't know you're filming him. There's a brief window of candidness, and then he realizes what you're doing, and he flips off the camera, jokingly.

Or he's carrying his bike up the stairs for another attempt at whatever it is, and you're sitting there with the camera running, and as he passes by, he sticks his face in the lens and makes some goofy expression.

All of those moments, which might seem "funny," are really not funny at all. What you're witnessing is just humans alleviating the discomfort of not knowing what to do while being filmed. It is in fact pure awkwardness — the opposite of candidness — and watching it makes us, the viewers, feel uncomfortable, whether we realize it or not.

(On the shooter's side, this is why Tumblr is overflowing with "street photography" of the backs of strangers heads and why the best street photographers and photojournalists are so amazing.)

That's my theory, anyway. It's up to you to decide whether any of what I'm claiming resonates as true.

For editors, the solution to this awkwardness is simple. Leave those awkward moments on the cutting room floor. While you're at it, you might as well tell your homeys not to make those stupid faces.

In fact, I'll say it for you: Hey riders, quit making stupid faces.