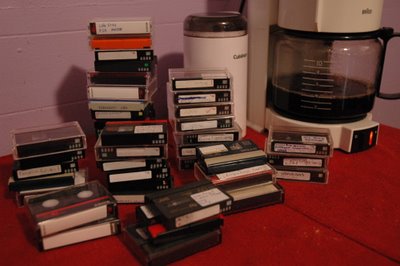 I've been experiencing uncontrollable surges of creative energy. Sometimes there's a very specific craving that can be isolated and satisfied--writing, riding, drawing, photography, shooting video, editing video, playing with cardboard, arranging furniture. Last night I was almost overwhelmed by all these desires pulling at the same time. It occurred to me that the word "media" could apply to most of those different past-times, on some level anyway, and I wondered if that was significant. And I considered how these different creative pulls seem utterly complementary. I've known for some time that my relationship to bmx is changing. I can tell that the phase of tossing myself down handrails without health insurance is coming to a close. Something else is coming. While I do occasionally pine for the dedicated "crew" to which I once felt so connected, these days I find myself most content riding alone or with my brother, more and more.

I created this blog today as part of the continuing exploration of my bmx "identity," why I ride, and the changing role of riding in my life. I don't know how the blog is going to pan out, so I won't make predictions. Initially, I think it will be a documentary of the production of our video. While skateboarding has countless websites and discussion forums and blogs dedicated to video production and photography, bmx seems to have few if any. I know dustin from destroybmx tried to start a dedicated messageboard (called bikemedia.net), and it didn't pan out. I wonder if it was just under-promoted or before its time. In any case, it's gone now, and no one has stepped forward to fill the niche. It's a niche larger than can be filled by a single website, I think. I'm certainly not attempting to fill it with this blog, but I'd like to connect other bike riders interested in photo and video. Personally, video and photo are not so much professional interests; rather, they are aspects of the creativity, self-expression, and progression of my own bike riding.

We have ten years of footage, it seems, and it is (of course) almost all completely outdated. Even if someone did a trick that was cutting edge at the time, we've sat on the footage for so long that it no longer matters. Looking at this mound of tapes, and wondering what tiny portion will actually "count" is potentially discouraging, but there is stuff there. Last week I went through all the footage that I had captured on the computer and pieced together three solid minutes of video. Very solid, I felt. Tight. Would people watch this? I think so, if the right people knew about it.

The videos that I can watch over and over, the videos I love, are not necessarily those with the best “tricks.” The videos I love are those with the strongest “vibe,” I’ll call it. I don’t think I could identify with a video called Wide Awake Nightmare, or All Time Low, or Wasted Days, no matter how impressive the riding. For a counter-example, the bmx world didn’t bat an eye at the Jonah Lidberg’s part in Drop the Hammer, entirely self-filmed via tripod, one of the most powerful pieces of bmx media I know of. Curiously, every other clip I’ve seen of Jonah has affected me in the same way. Steven Hamilton consistently gives me chills. Ralph Sinisi’s props bio is probably my all-time favorite video part. I could go on, and I will, as a regular part of this blog. But in the meantime, the point I want to make is simply that certain videos have that quality I’m calling “vibe.” I look forward to exploring this, figuring out exactly what it is I’m picking up on.

I don't know if people are going to read this, and I can't tell if that's important to me. If anything I have said resonates with you, post a comment, or offer a contribution.