The dvd gets its first review. (And I respond.)

A million thanks to the NoBikes blog for their kind review of our video. Please go there and read it. Since someone has now finally voiced a public response to the video, I feel comfortable saying something about my own creative intentions. 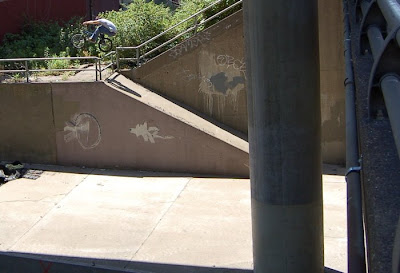 St Louis, 2006. Photo by Atika Piff. The sub rail has since vanished.

My main goal with the project was to create a video with an authentic vibe that would not give the viewer a chance to get bored. From watching a million bike videos over the years (and a million skate, snowboard, inline, and motocross vids, too), I'd come to the conclusion that the videos with the most lasting appeal were not necessarily those with the most advanced riding and definitely not those that portrayed riders as thrillseeking rockstars.

My personal favorites showcase the personalities of the riders and what they put into their riding, not just their tricks set to music. Sometimes a rider's strong personality seems to be revealed through his riding, as with Steven Hamilton, Ralph Sinisi, Mike Aitken, Troy McMurray, Ian Schwartz, Jim Cielincki, Bob Scerbo, Vic Ayala, Jeremy Davis, Jimmy Levan, Lino, Charlie Crumlish, the Enns, or Taj, to name but a few. (It's no coincidence that these are all guys I feel I could get along with outside of bike riding.)

Other times, it's achieved through the tasteful choices of filmers and editors. I can't, for the life of me, fathom why, in 2008, a producer would choose to include footage of a rider flipping off the camera. It's not merely lame--it's a fake gesture that, in my opinion, reveals the rider's discomfort in front of the camera. And I think those moments make the viewer uncomfortable and ruin the possibility of a good vibe. (More rambling thoughts on flipping the bird in this old blog post from 2006.) That Aaron would say our video has an "excellent vibe" means the world to me. 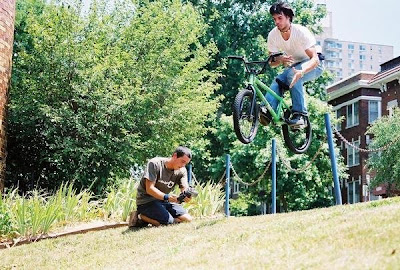 Beyond the simple goal of good vibes, I also had an editing/directorial/format concept in my head that I'd been waiting forever to see used in a mainstream video. I finally realized I'd have to create it myself if I ever wanted to see it. As Aaron wrote in an email to me, "I really liked how the music kind of took a back seat to the riding/background noise in a lot of that; not sure if that was your intention but it was definitely rad."

The sound was very intentional, and I'm psyched that Aaron noticed.

I recall watching some snowboard movie that was all shot on 16mm film. The cinematography was beautiful, but the only audio was the musical soundtrack. Then there would be a couple of 3ccd video clips mixed in, and those shots would have sound, and I would get a sudden surge of adrenaline at how comparatively real those moments felt.

Another time, Terry Gross was interviewing the director of The Bourne Ultimatum, and he talked about the work of the sound engineer. He described how important it was for the different international shooting locations to have their own distinct atmospheric sound character: how does a gunshot sound different, say, reverberating through crisp, empty, arctic air, versus through muggy jungle tropics, versus through angular, concrete cityscape? Sort of like thinking about the warm and cold tones that you have to deal with when color-correcting.

Those two experiences (the snowboard video and the interview) altered my awareness of sound, and when I started editing the video, I was thrilled by the raw aural textures of our bike riding footage. For a time, I even fantasized about making a video with no music whatsoever. But I figured that kind of conceptual art project would require a professional level of riding and some serious video-making clout in order to make sense. I think All Day did something similar for its intro--an extended montage of night-time lines, one clip from each of the Animal team riders. Really great, really well done. Not available on Youtube, that I'm aware of...

Since I didn't think I could pull off a video without music, I opted for tracks that were mostly pretty mellow, mostly without words--more like a film score than a music video, maybe. And I'm satisfied with the result.

So, when Aaron of NoBikes describes bmx is cute as "different," I hope people don't take it as a euphamism for "weak." And I don't believe in trying to be different for the sake of being different. We just made the video we wanted to make, a video that (I hope) represents bike riding authentically.

Thanks, Aaron. Glad you found it worthwhile.


the humble bmx is cute trailer: